What’s the Hourly Rate for a Sydney Electrician? (Updated 2020)

What’s the Hourly Rate for a Sydney Electrician? (Updated 2020)

Most electricians charge a call out fee to avoid what are commonly called “time wasters”. This is common practice in all trade work where an honest reliable tradie could spend his whole day quoting jobs and go broke in a week because he spent a fortune driving around Sydney and didn’t win a job. It will vary from company to company but generally a range of $30-$70 is considered fair and is standard practice.

It’s important to note that DCN Electrical will absorb this charge into the first hour of actual work. So as long as you go ahead and complete the job with us the call out fee shouldn’t be a concern.

Generally, if you want an experienced & trustworthy electrician you will need to budget for around $60-$95 per hour, most sparkies 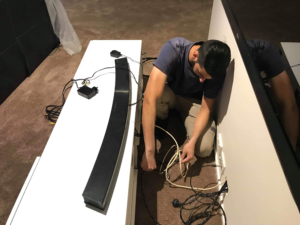 pricing will be around $50-$70 per hour depending on the job being done. Also, be sure to ask him if he charges in 15 minute blocks though as you don’t want to have 15 minutes of work rounded up to 1 a full hour of pay.

As a rule of thumb, If it’s a longer job the electrican will charge less per hour and more if its quick. This is logical as he will have less traveling time to one big job than 3 small ones.  It quiet common for electricians to charge flat rates for certain jobs as the time and costs are usually fixed allowing for this:

What could cause extra costs?

An electrician has a legal and moral duty of care that any wiring completed by him is safe and up to standard when he leaves. This is also true even if the wiring wasn’t totally safe when he arrived. This is important to know as it means that in order for the work to be compliant and for you to get a compliance certificate you might need to pay for additional ‘make safe’ work to be carried out.

If your in a newer home and the wiring is compliant with current standards then this shouldn’t be an issue but electrical safety standards and laws have changed over the last 50 years and an older home may not be compliant by today’s stricter standards. If this is the case for your home you may need to budget for and expect some extra costs that will bring this older wiring up to scratch. It’s for your own safety and well worth the small extra investment.

What is the rate to call out an emergency electrician?

When the power is out or there is a storm, the first thing you want (and we do too) to know is that you’re safe. This is where an electrical safety switch is invaluable. After that a fault is best seen to by a highly qualified and licensed electrician. I hate to say it but there are cowboys out there, and we’re often called out to repair their work.

The cost to call out a Sydney electrician in an emergency can vary widely depending on the time, if it’s a weekend, or if they are busy due to a storm. Too often we hear of customers putting off critical electrical work because of price gouging or people just not being able to afford the call out fee on top of the hourly rate.

If you’re after a quote to find out how much electrical work will cost at your home you can call us on 0404 863 975, or request a quote here on our website.