Installing a power socket, or even extra power points, is a relatively simple task. Many homeowners around Sydney, Australia with a person who fancies themselves as a home handyman might consider doing it themselves. A word of caution for you, it may be better to get a professional sparky in as doing this work yourself is actually illegal, not to mention dangerous. One very important thing you need to keep in mind when carrying out any electrical work is certification and insurance. 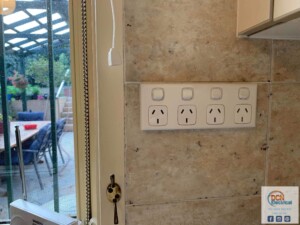 You may not know it, but unless your electrical work has been carried out by a qualified electrician you may be breaking certain building codes that could void your insurance should there ever be a problem. Imagine being told by your insurance company that they won’t pay your claim because your wiring wasn’t professionally done. It’s a nightmare scenario for most homeowners, but it has happened.

Stuck? Call DCN Electrical and we will come and help.

Here are the steps we would follow to install, replace or move your power point

How to wire an Australian power socket or outlet:

Step 1: Turn off the power to the entire building at the mains switch located in your home’s fuse or junction box.
Step 2: Carefully unscrew the cover plate from the wall bracket. The screws are often hidden under little caps to leave a tidy appearance so you will need to pop these off with a sharp pick of some sort.
Step 3: Before touching anything inside we need to make 100% sure that there is no voltage left in the wirs of the house. Many an unsuspecting sparky or homeowner has turned off the main power only to be electrocuted by residual current still left in the lines.
Step 4: Note where the red and black wires are attached to the old receptacle. You may also see a green and Yellow wire, this is the ‘earth’ wire.
Step 5: Remove the wires.
Step 6: Re-attach the wires from the old power outlet to the same terminals in the new socket.
Step 7: If the wiring has a green/yellow ground wire, attach it to the green terminal on the back of the new power socket.
Step 8: Place the new power outlet back into the wall and screw it in using the same holes from the old one.

It’s a similar process to convert a single to a double outlet, so that you may not have to install extra power points, but you still need a licensed electrician to do the work because the wiring behind it all is different. This really a better set of instructions on how to replace a power point cover, and some switch companies make it easy.

Although I have listed the instructions above, I strongly recommend getting the experts (me) in to take care of this for you. It is a fairly quick and therefore cheap job that when done properly using the right tools will ensure that you and your family are safe and that all the relevant laws have been adhered to. This has the major benefit of guaranteeing your insurance company can’t use your handyman work to excuse not paying because some little wires somewhere weren’t up to standard.

Stuck? Call DCN Electrical and we will come and help.